While relocating a bull snake that had decided to bask in the warm sunshine right on the back steps of one of our buildings, a Swainson’s hawk perched atop a power pole captured my attention. It was apparent that the beautiful raptor was sporting one of our GPS Platform Transmitter Terminal (PTT) backpacks, which allow us and our collaborators from West Texas A&M University and the U.S.G.S. Texas Cooperative Fish and Wildlife Research Unit at Texas Tech University to gather data from the hawks on a year-round basis. The antennae stretching upward from the PTT was quite visible and, at that distance, I could even see the leg bands that all of our study birds wear.

Hours later, I arrived by commercial airline in Corpus Christi, where, over the next four days I had the privilege of interacting with fellow wildlife biologists at a conference focusing on birds-of-prey. The Raptor Research Foundation 2014 Conference was a well-run meeting and featured presentations on research from around the globe. Topics ranged from ecology, conservation and monitoring of species; to effects of wind energy development and electrical infrastructure on species; as well as evaluating techniques for the safe study of these magnificent creatures. It was a great opportunity for the world’s top researchers of birds-of-prey to share ideas and, in some cases, form new partnerships.

Pantex played a role in the conference in a couple of ways. First off, at our/Pantex’s recommendation, the U. S. Department of Energy (headquarters in Washington, DC) joined six other sponsors in providing financial support for the conference. This was well within the spirit of Executive Order 13186, Responsibilities of Federal Agencies to Protect Migratory Birds, which directs federal agencies to promote research, partnerships, and information exchange related to the conservation of migratory birds. How perfect of a fit was that? Those three goals were met through one action!

Besides sponsorship and participation in the conference (attendance and networking), Pantex and collaborators with the U.S.G.S. Texas Cooperative Fish and Wildlife Research Unit at Texas Tech University presented a poster, “Movement rates of Swainson’s hawks migrating from Texas to Argentina.” Graduate student Laurie Groen did a great job with the preparation and presentation of that poster.

When I returned to work at Pantex the following Monday morning I looked online and I was excited to find that one of our PTT-marked Swainson’s hawks was making a southerly move. Its initial movement was southeast, which has been characteristic of many of our birds, and was currently in the Wichita Falls area. Soon, it will turn to the south, sail by Corpus Christi where the world’s raptor researchers had just gathered, and be off to Argentina.

It is truly great that Pantex has built a program based on partnerships, and consistently demonstrates a role in the conservation of migratory birds. Funding for the projects is provided by the U. S. Department of Energy/National Nuclear Security Administration in cooperation with Consolidated Nuclear Security, LLC. 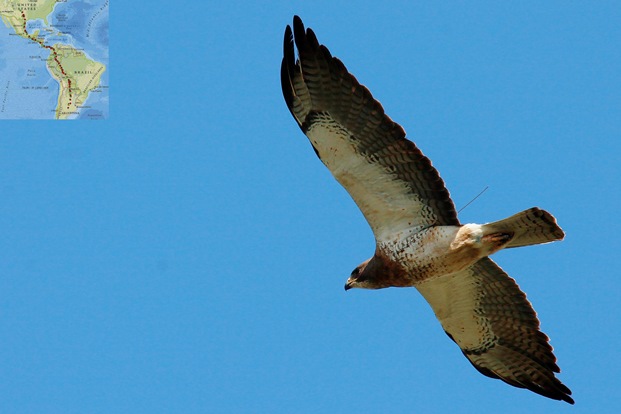 Photo: A PTT-marked Swainson's hawk captured on camera north of Panhandle, TX. The inset map shows the typical migration route of Swainson's hawks from our area, once into the interior of Mexico, from the entire breeding range of the species. Photo courtesy of Mark Elliot.