Well, in either case my answer has nothing to do with something that is rare or new to me. In fact, the species is quite common, though not commonly observed because of its tendency to stay in burrows except at night or during rainfall. As a kid in my hometown of Dalhart, I found them living in our water meters.

Allow me to get even more specific.

What I am calling Pantex's strangest creature is a form of the adult barred tiger salamander, which is physically different from the terrestrial form as determined by a "climate of sanctuary" within a harsh environment. 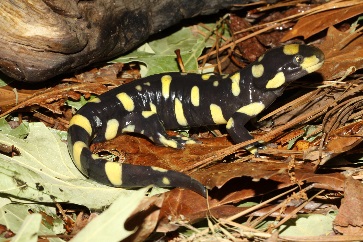 An adult of the terrestrial form of the barred tiger salamander. Photo courtesy of Richard T. Kazmaier.

But, I digress. Let's look at the "conventional" reproduction strategy of our barred tiger salamander. This species lives in burrows in the uplands, and like toads, "migrates" by the dozens, hundreds, or thousands during or after rainfall to reproduce in our playa lakes and other such situations. Depending on water temperature, their eggs hatch in two to five weeks into larvae that have front legs and external gills. Eventually, they "sprout" hind legs, lose their external gills, and then leave the water at three to four months of age. The larvae are often collected and sold as "water dogs" for fish bait.

In June 2010, my West Texas A&M University subcontractor working on amphibians and reptiles encountered approximately 50 terrestrial adults crossing the highway that makes our east boundary. This was following a substantial thunderstorm and each individual was moving east to west, presumably towards a playa wetland located approximately a half mile to the west. That same day, I observed a similar scenario on the highway and in proximity to a playa wetland a few miles to the south.

Here is where the strangeness begins...

In an arid environment, where tiger salamanders have access to a fairly permanent, fish-free body of water, a proportion of their larvae take advantage of the sanctuary of the available water by sexually maturing, while retaining their larval form. This is called neoteny. Besides an advantage to the individual (safety and habitat for reproduction), this benefits the population by allowing for continued production during times that the terrestrial form may not have available surface water and for a duration to accommodate egg-laying and the maturing of larvae.

A proportion of the neotenic population morphs to become cannibalistic. These get huge, develop proportionately larger heads and teeth, and specialize on eating smaller individuals of their own kind. Neotenic tiger salamanders are perfectly capable of reproducing and will mate with each other, or even with their terrestrial counterparts that enter the water to breed. Again, a proportion of the resulting offspring will morph into the terrestrial form, while many will remain in the water in the neotenic form. 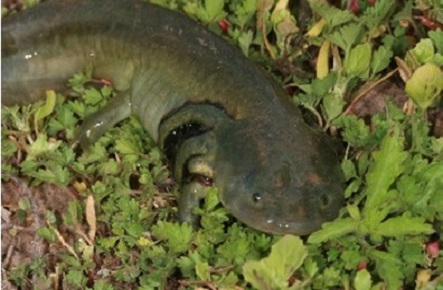 An adult of the neotenic form of the barred tiger salamander. Photo courtesy Richard T. Kazmaier.

Equally interesting; should the neotenic adults become stressed, such as through lowering water levels, many will go ahead and metamorphisize into the terrestrial form and leave the water! Huge individuals will lose a significant amount of mass in the transformation.

So, where at Pantex do we have these interesting neotenic creatures? The answer is our Waste Water Treatment Facility and associated Irrigation Storage Pond, which fit the requirements for neotenic individuals to thrive: reliable, fish-free water source in an arid or semi-arid environment.

Are these guys equipped to survive in an arid environment or what? The tiger salamander is one of my favorite species that inhabits our Wild Pantex.