Wild Pantex – Bird of the Day: The Cliff Swallow

I have had only one post covering the topic of Bird of the Day since I began writing Wild Pantex blogs back in early 2013 (American Bald Eagle). A timely candidate for the second is the Cliff Swallow which began arriving in our area during the last days of April. Along with its scissor-tail-adorned cousin, the Barn Swallow, the Cliff Swallow is the reason that we are applying sky blue paint on the eaves of specific buildings around the facility.

The Cliff Swallow has a dark chestnut and blackish throat, and a pale forehead. However, its square tail, buffy-colored rump, colonial nesting habitat and gourd-shaped nest easily differentiate it from the Barn Swallow. Formerly, this species was confined largely to overhangs on cliff faces, but now the bird is also adapted to nest on the sides of buildings and under bridges and other protective “canopies”. Its nest is comprised of pellets of mud, but access to the nest is limited to a small entrance hole and short tunnel. The nest interior is lined with grass, feathers and hair, and contains two to six eggs at a time. Normally, only one brood is raised per year, rarely two. A colony of these birds may number in the hundreds, with nests crowded against each other. 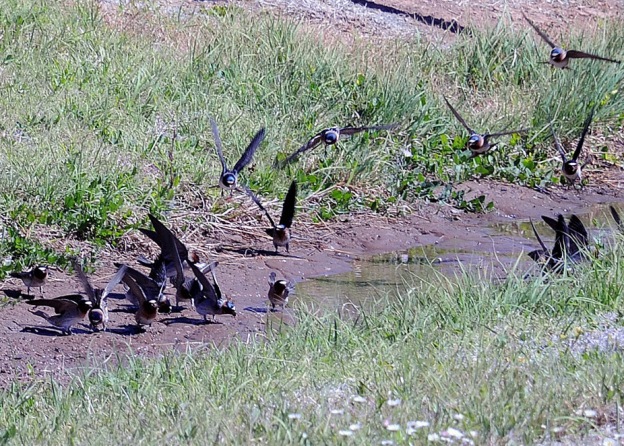 There is a little bit of a love-hate view of the Cliff Swallow right now. Some hate that this colonial bird often chooses to nest on buildings, but more importantly, the colony often is started over windows, doors and walkways. They are also quite messy during nest building as mud can splatter and towards the end of the nesting period because the young have grown into such “consumers”, that waste cannot be hauled away fast enough by the parents. However, both of those are periods of short durations. The bird, its nests, and its eggs are all protected by the Migratory Bird Treaty Act. In fact, as a colonial bird all nests of the colony are protected from the time the first egg is laid in the colony and lasting until the site no longer is being visited by the swallows (Empty Nest Policy’ of the U. S. Fish and Wildlife Service).

While there are practices that are effective in preventing swallows from nesting at a location, each site needs to be evaluated carefully. After all, the next location that they move to may impact people much more, thus making previous locations appear to have been a more acceptable place for the birds considering impacts to people and the bird’s relatively short nesting season.

The love for the bird comes from our familiarity with the bird as the “swallow of Capistrano” and for its penchant for consuming flying insects. The architecture of its nests and the fact that each consists of 900 – 1,200 individual mud pellets intrigues people, as does the fact that its annual travels take it to and from a wintering area that includes from Panama to northern Argentina. Our Wild Pantex Bird of the Day has completed the portion of its annual nesting cycle and individuals are departing on their annual trek to winter in the western two-thirds of northern South America. Pantex will miss the beneficial and intriguing Cliff Swallow.

Cliff Swallow nests under different stages of construction at Pantex.