Wild Pantex – Bird of the Day: The Dickcissel

One of my favorite prairie birds is the Dickcissel. This native sparrow resembles a miniature meadowlark with its yellow breast and black bib. The Dickcissel’s name actually comes from the male's song –they spend a whole lot of time proclaiming their name and territory.

This summer, I had the pleasure of hearing a Dickcissel sing regularly as I walked from my car or work truck to the entryway to my office building. Several times while walking with someone I hollered out, "shhsh, hear that Dickcissel singing?" Of course, there was usually a wait period for the bird to sing again after the question rolled off my tongue. Normally, though, the Dickcissel didn't disappoint and soon announced his presence again.

The term Dickcissel usually puts a smile on the other person's face, maybe because with a name like that they think I must be pulling their leg. My next statement is invariably, "No, I am not kidding. These guys stay here to nest in these wetter years, and this was the second such notable year since I have worked out here.”

This native prairie sparrow likes the taller cover found here during our wetter years. Their nests are a bulky cup of weed and grass stems placed slightly above ground-level in dense grasses or in saplings. The nests are lined with finer grasses, rootlets and hair, upon which three to six unmarked, pale blue eggs are laid.

I first became familiar with the Dickcissel while attending graduate school in South Dakota. I lamented the fact (as a young wildlifer) that the state bird of South Dakota was an exotic bird – the Ring-necked Pheasant. Nevermind how much money the bird brings into the state's economy – state birds in this great nation should be native birds! In a prairie state it should be a good prairie bird!

"Which one," my summer technician once asked.

Since both of us thought that the Dickcissel was a great prairie bird, it was an easy choice! The Dickcissel is a great "bird of the day" designee. It is a welcomed visitor to our Wild Pantex, and the more years that we hear its voice, the better off we all are knowing that rainfall has been abundant here on the shortgrass prairie. 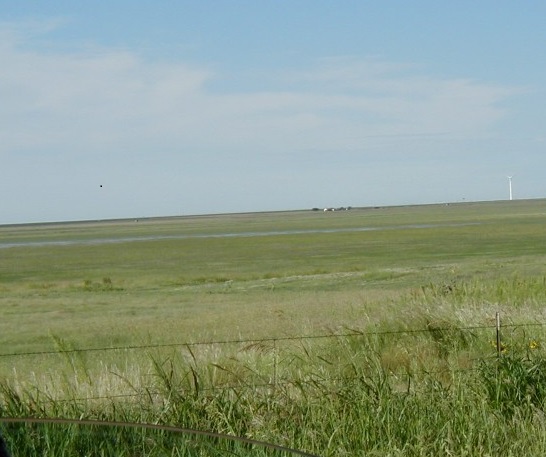 The shortgrass prairie is a productive ecosystem, including for ground-nesting songbirds. In some years, the Dickcissel makes irregular movements outside of its core breeding range to breed in surrounding areas of grassland.