It’s December and time again to conduct our annual spotlight surveys for wildlife. A 24-mile route, established almost 20 years ago, is driven on three separate nights beginning just after dark. As we proceed along the route, our powerful spotlights illuminate the habitat on each side of the vehicle allowing us to possibly detect several kinds of animals and numbers of animals not typically seen during our normal workday. This makes these spotlight surveys an integral part of monitoring wildlife species at Pantex.

Fall is the time of year when the young of many species have dispersed to set up their own territories, which increases the chances of observing some of our rarer species. Also, it is late enough in the year that our vegetation has died back, making visibility better. The value of these surveys ranges from simply having the opportunity to monitor nocturnal animals for presence or absence to monitoring long-term trends of numbers or densities of these animals.

We spend much time and effort trying to document and monitor our natural resources, and we utilize that information for protecting them, making land management decisions, judging the effectiveness of our management, and answering questions asked by our management, our customer (the U. S. Department of Energy/National Nuclear Security Administration), external entities, and the public. Such data is reported annually in various Pantex documents.

On most nights, a spotlight survey at Pantex will yield black-tailed jackrabbits, cottontails, mule deer, striped skunks, and coyotes. Bobcats have been frequently sighted during the last decade. A little less often, a night’s work could include documenting badgers, gray foxes, raccoons, white-tailed deer and, unfortunately, feral cats. In addition to mammals, a spotlight survey might be the only opportunity for us to document short-eared owls, a wintertime visitor to the region.

Coming from a background of working for the Texas Parks and Wildlife Department, our spotlight surveys are conducted in a manner that data is comparable with Parks and Wildlife’s, as well as among our own data between years.

Obviously, conducting these surveys is more about just consistency in methodology and being able to see eyes. It is also about seeing eye-shine at great distances, through vegetation, and seeing that of species with small eyes, those that don’t shine as bright as others, or even those that don’t shine at all. On top of that, we have to distinguish between mule deer and white-tailed deer, red foxes and grey foxes, striped skunks and badgers, bobcats and coyotes….you get the picture. It often takes time, patience, and the aid of binoculars to make those determinations and sometimes to even get a second look at the eye-shine. With spotlight surveys, the angle and the focused beam of the spotlight are everything in being able to see the eye-shine and subsequently making a determination of the species of animal.

A typical spotlight survey will take us two to three hours to conduct, depending on how many stops that we have to use binoculars and identify eyes that are a considerable distance from the vehicle. Except for the cold, it is usually an enjoyable time and an opportunity to see a little nighttime magic and document more nocturnal species in a couple of hours than we can normally see over the course of a month or even a few years.

During my time with the Texas Parks and Wildlife Department, I had the opportunity to participate in spotlight surveys in Palo Duro Canyon, the Canadian River bottom, breaks of the Caprock Escarpment, and in the Rolling Plains. Whether in those habitats or on the flat plains of Pantex, it sure is a different world out there at night. Using the lit-up beam of a spotlight, it’s another view of our Wild Pantex, one that most will never get to see. I look forward to them every year for that very reason.

Please feel free to share this link with others that enjoy wildlife or that appreciate entities that strive to contribute to wildlife conservation. 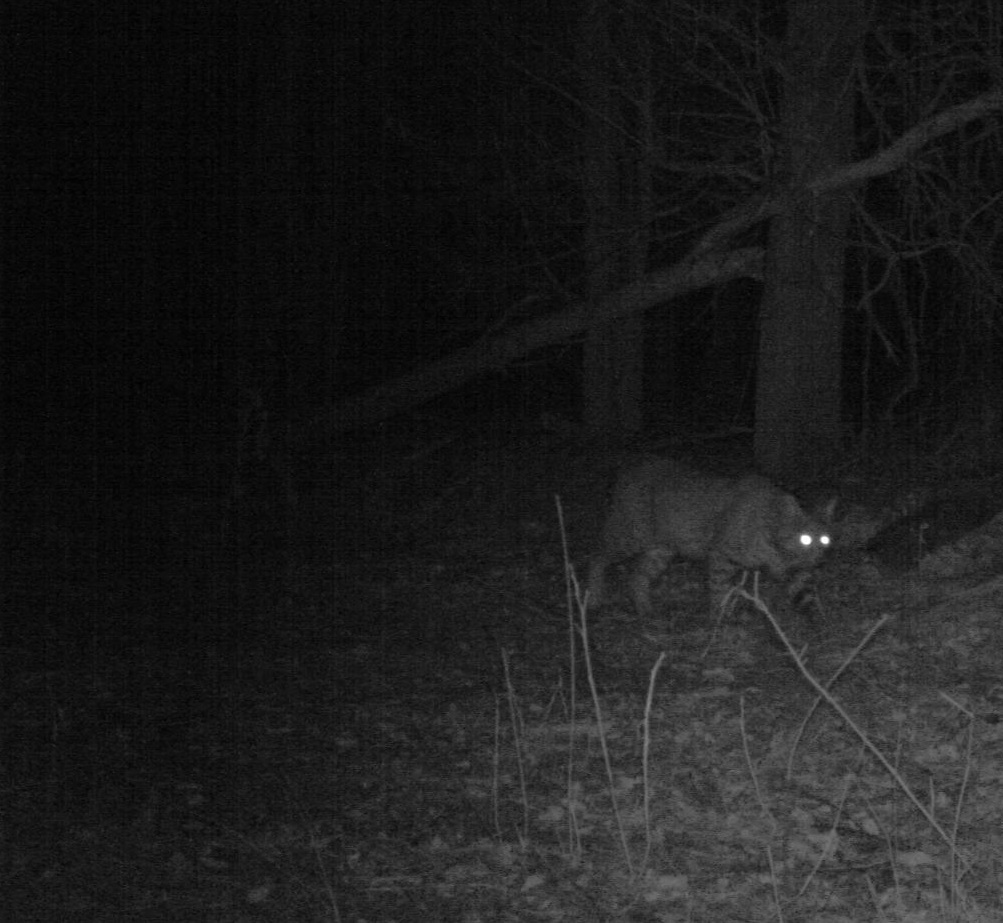 Photo: A bobcat prowling during the nighttime hours on the U. S. Department of Energy/National Nuclear Security Administration Pantex Plant.