Amidst a busy schedule and the winter cold, there is plenty going on with our Wild Pantex.

Two female bobcats are parading half-grown kittens around the facility. The boldness and naïveté of the “teenaged” youngsters result in more sightings, which will taper off as the birth of the next litters draw near. Although hard to see, ear tags worn by the mothers reveal their age and lineage.

As I write, several of the ten Swainson’s hawks we have been tracking in South America are drifting this way through South and Central America. We are gathering data on their interactions with wind farms and, once they arrive on their nesting territories on and around Pantex, monitoring will expand to include how wind energy development may affect their productivity in nesting.

The first Purple Martins have already arrived at their colonies and we will soon be capturing birds and removing the tiny geolocator- and G.P.S.-data loggers as we notice them. The data will enable the large collaboration we are involved in to look closer at roost sites along the migration routes and in wintering areas. This is in an attempt to figure out why this songbird is experiencing a decline in its range wide population.

Pantex made a big splash Feb. 19-21 at the annual Texas Chapter of The Wildlife Society meeting in Corpus Christi, Texas. More than 700 government, non-governmental, university, private and student wildlife biologists attended the meeting. Four presentations on Pantex-sponsored work were given:

This winter has also been a time of writing annual reports and working with collaborators on a couple of manuscripts. I’ll save mention of those until they are published, but we are excited about their upcoming releases. Overall it has been a great start to a new year! 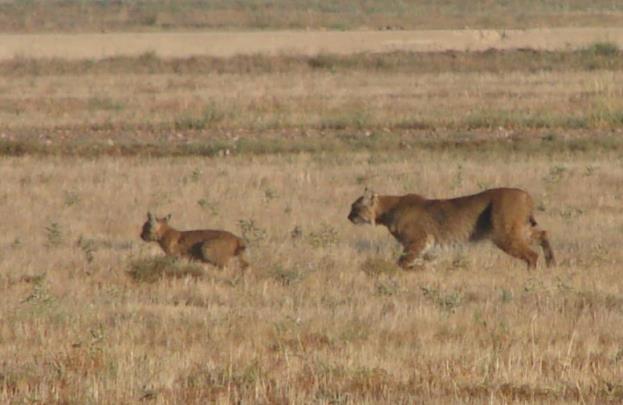 A very healthy female Pantex bobcat and her half-grown kitten. Notice her eartag.