For more than a decade Pantex and West Texas A&M University studied the ecology of our resident prairie rattlesnakes. We captured hundreds of them and marked them with subcutaneous microchips.

Around 40 of them carried radio-transmitters, which we carefully surgically implanted into their body cavity. These snakes then went about their business, and their transmitters allowed us to follow them around and learn more about their behavior and general ecology. We quickly confirmed the location and characteristics of winter dens, or hibernacula as they are referred to scientifically. Prairie dog holes are an obvious choice, as are sinkholes associated with old landfills and pipelines. Hibernacula must be deep enough that the snakes can escape freezing temperatures, and most animal burrows (ground squirrels, woodrats, etc.) evidently do not meet this requirement – snakes moved to dens of more significant depth prior to the onset of the coldest weather.

Rattlesnakes cannot be subjected to freezing temperatures; thus, as the nights get colder in the fall they begin to use burrows at night to escape this danger. After a few light freezes (usually in October or November), they make a quick trip back to the den in which they will spend the winter.

From our research, we learned that rattlesnakes can be on the surface during every month of the year. Rattlesnakes are cold-blooded and have a need to bask in the sun, and thus warm to the point that all tissues and organs work properly. In fact, chances are pretty good that some snakes will surface to bask in the sun anytime during the winter that temperatures exceed the low 50s, especially provided there are clear skies. At warmer temperatures, the snakes can actually bask even under cloud cover.

One aspect of wintering snake ecology that we did not get to was how many snakes might congregate in these dens. Just from experience, we think most Pantex hibernacula host up to a dozen or two snakes, but the prairie rattlesnake is known to congregate in numbers in the hundreds. I have seen as many as five or six basking around a den entrance at once. Oftentimes, the 9-inch young-of-the year will be coiled up on the backs of larger snakes.

Hibernacula receive historic use, and it is believed that the young snakes follow the scent of the older, experienced snakes to the dens. In our area, outside of prairie dog colonies, winter dens may be scarce and thus limit rattlesnake populations. Here at Pantex, snake populations from large areas oftentimes end up in a single available winter den, thus making that den site very important to the snakes of that area.

So what does this all mean? Well, I hope you enjoyed the ecological aspect of this blog. But, if it is just the safety aspect that you are interested in, be sure to be very observant when you are working or otherwise out in the field when wintertime temperatures warm. 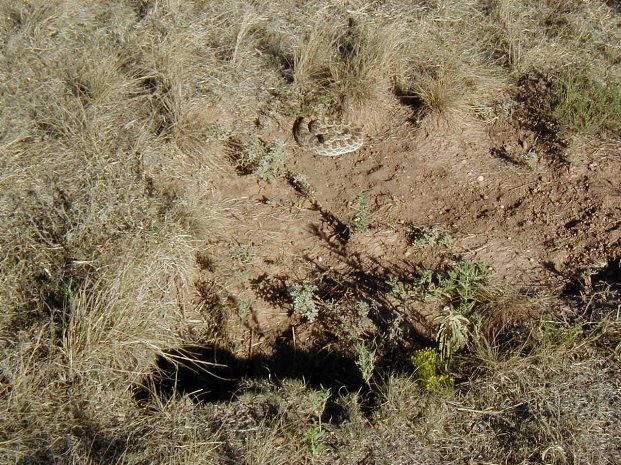 A prairie rattlesnake basking on a warm fall day on the edge of its winter den.