Every state in the United States has designated a bird species as its state bird. Texas’ is the Northern Mockingbird, Oklahoma’s the Scissor-Tailed Flycatcher, and New Mexico’s is the Greater Roadrunner. Besides Texas, the mockingbird is also claimed by four other states: Arkansas, Florida, Mississippi and Tennessee.

So, what if Pantex were to designate an “official bird” – which bird would it be? We only have 202 to choose from; that’s how many are on our all-time bird list. Well, let’s omit the four species of exotics from consideration. That is the House Sparrow, European Starling, Eurasian Collared Dove, and Feral Pigeon (Rock Dove.) Note that the state of Delaware chose the Blue Hen Chicken, South Dakota chose the Ring - Necked Pheasant, and Rhode Island the Rhode Island Red Chicken as their state bird – all exotics.

There are many good candidates here at Pantex. For example, the American Bald Eagle is a logical candidate because it elicits second glances and conversation when it is observed during its fall through spring stay here in the Panhandle. Its status as our national symbol garners it extra points, as it should.

And how about the Swainson’s Hawk, which is commonly observed here? We are learning so much about them through our collaborative work with West Texas A&M University and the United States Geological Survey (U.S.G.S.) Texas Cooperative Fish and Wildlife Research Unit at Texas Tech University. Data gathered by backpack transmitters is recorded year-round, thus helping us learn how this bird is affected by rapidly expanding wind energy development. Because the units gather and transmit data year-round, we are learning about migration and wintering ecology of these birds. However, the Swainson’s Hawk is likely more numerous around the Plant now, than historically. Nest trees around here are always either an exotic species, or they are in a cottonwood or willow tree that’s existence is enabled by the altered moisture regime of a roadside ditch, pit, supplemented water, or other such situation.

I will argue that we would need to focus our nominations on species that are considered true shortgrass prairie species, one that doesn’t rely on structures built by man. Good candidates are the Horned Lark, Killdeer, and Western Meadowlark. But, there is an additional candidate.

Why not the Western Burrowing Owl? This is a neat little owl that lives in burrows, almost exclusively in our prairie dog colonies. Everybody gets excited when I point one out and even more so when they discover that I can imitate a vocalization they make when securing mates and defending territories. Banding has demonstrated that most of our resident burrowing owls leave Pantex for the winter months; however, a few individuals from points north are usually around in the winter.

We have spent considerable effort studying burrowing owls, much of this through collaboration with Texas Tech University and the U.S.G.S. Texas Cooperative Fish and Wildlife Research Unit at Texas Tech. The little fellow is a species of regional conservation priority (U. S. Fish and Wildlife Service) and a species of international concern. A great representative of an indigenous bird – the Western Burrowing Owl would be my choice as the Official Bird of Pantex.

I asked our Agronomist, Monty Schoenhals, who is an avid birder, what bird would be his choice. His nomination would be the Western Meadowlark. Like the Western Burrowing Owl, the meadowlark is very recognizable, but this shortgrass prairie representative is abundant and can be seen and heard across the property. A good choice, indeed.

What would be your choice? 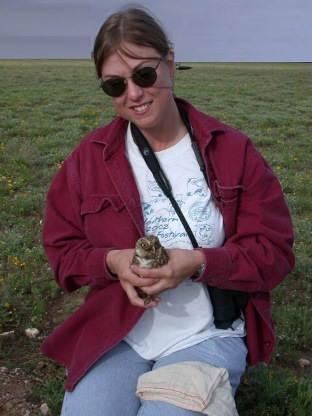