Wild Pantex – The Swallows of Pantex

Pantexans are quite familiar with the bird nests made of mud that adorn our buildings each spring and summer. You may even have these on your house, whether you live in town or in the country. The nests that are most numerous are made by swallows, although the Say’s phoebe and American robin also construct a nest made largely of mud, which also commonly occur on buildings and other structures.

At Pantex, two species of swallows are present during the nesting season: the barn swallow and the cliff swallow. Swallows are very beneficial birds, consuming a diet that includes a wide variety of flying insects. No, they are not going to wipe out mosquitoes in your neighborhood, but you can be sure that they are going to eat insects from sunrise to sunset.

The barn swallow is blue on top and has a rust-colored breast. It has a characteristic deeply-forked tail. Barn swallow pairs nest alone or in small, loosely-situated colonies. Its nests are bowl or cup shaped, and its interior is lined with grasses and then white feathers. Formerly a cave nester, the barn swallow now nests under eaves, on porches, in abandoned buildings, under bridges and in culverts. At Pantex, I’ve even seen them nest under a utility box erected on a post. Barn swallows incubate four to six eggs at a time, and usually raise two broods per year, rarely three.

The cliff swallow has a dark chestnut and blackish throat and a pale forehead. However, its square tail, buff-colored rump, colonial nesting habitat and gourd-shaped nest easily differentiate it from the barn swallow. This is the swallow of Capistrano! Formerly, this species was confined largely to overhangs on cliff faces, but now is also adapted to nest on the sides of buildings and under bridges and other protective “canopies.” Like the barn swallow, its nest is comprised of pellets of mud, but access to the nest is limited to a small entrance hole and short tunnel. The nest interior is lined with grass, feathers and hair, and contains two to six eggs at a time. Normally, only one brood is raised per year, rarely two. A colony of these birds may number in the hundreds, with nests crowded against each other.

By the way, many Panhandle residents erroneously refer to these two swallows as Purple Martins. Actually, the Purple Martin is in the swallow family, but is twice the size of either the cliff or barn swallow. East of the Rocky Mountains, if you see a Purple Martin nesting in any situation, but within the cavities of a man-made bird house/gourd, you have either made an error in identification or someone is going to get a note published in the literature! That is how rare and newsworthy such an observation would be! Unlike with cliff and barn swallows, where males and females resemble each other in coloration, the two sexes of Purple Martins differ in coloration. Only the after-second-year male is all blue black (approaching purple) in coloration.

Swallows are extremely valuable birds. For the most part, Pantex loves the service that these birds provide in terms of insect control. However, their nesting in certain situations is often despised due to the mess they can create. Normally, by the time they are really messy, the young are about ready to leave the nest. This is because they have grown into such “consumers” that waste cannot be hauled away fast enough by the parents, as is the case when the young are small. A sky-blue paint used under the eaves and porches at Pantex is showing promise of encouraging the birds to nest elsewhere. In theory, it gives the birds the feeling that there is not a protective overhang under which they could attach their nests. The jury is still out on this technique, but its use appears to be successful. The goal is that they will choose a place that is good for the birds and Pantexans alike. 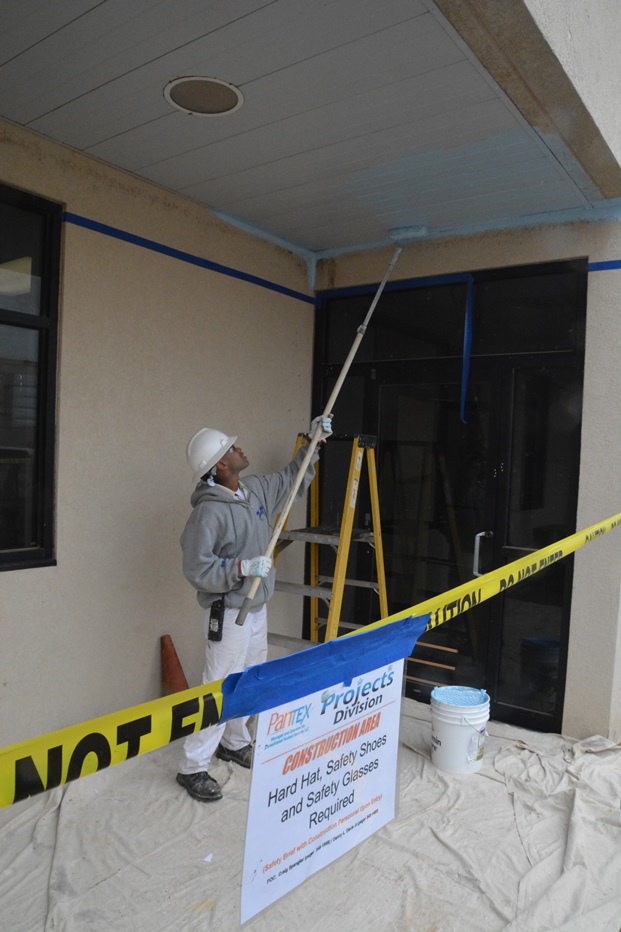 A Pantexan applies sky-blue paint to ward away barn and cliff swallows from placing their nests under the overhang of the building.