Wild Pantex - From deer tracks to reindeer in the Texas Panhandle

I write to you from a snow-covered Texas Panhandle and wonder if another round of wintery weather might be timed just right to give us a white Christmas. The season and a line of deer tracks in the snow outside of my office building gives me the idea to focus this edition of the blog on reindeer. I can honestly say that I have never had the opportunity to see a reindeer – for sure, not the flashing red-nosed variety. 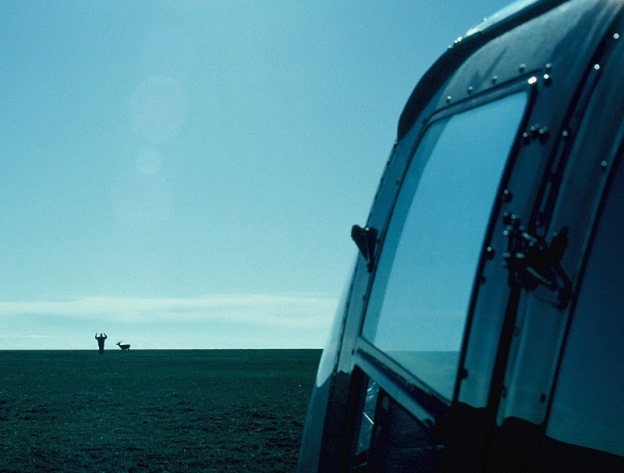 Jim Ray walks up to a caribou bull in the arctic tundra after being told that with hands above his head like caribou antlers, he would be able to do so –sure enough it worked!

I have, however, seen caribou, and some biologists lump caribou and reindeer together as one species (Rangifer tarandus). Caribou and reindeer are quite different in appearance. Reindeer are smaller and were domesticated in northern Eurasia about 2,000 years ago. Arctic peoples in Scandinavia and Russia still herd reindeer today, depending on them for food, clothing, shelter, and even the company they can provide as pets. Caribou and reindeer are unique among the deer family in that both sexes grow antlers, and like other North American deer, they shed and regrow them on an annual basis. 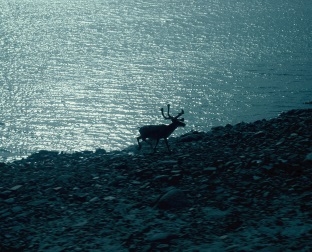 Although, not reindeer, per se, I did get to experience seeing and interacting with caribou in their natural habitat in the past when I worked for the Texas Parks and Wildlife Department. I was able to join a crew sponsored by the Canadian Wildlife Service that was banding geese on the Boothia Peninsula in the Arctic Circle. For two weeks during July 1994 we worked out of a helicopter locating and capturing geese along the Inglis River (this is another story in itself). I was more than 3,900 miles from home, but still an astonishing 1,700 miles from the North Pole. While searching for geese from a helicopter our field of view almost always included from one to several hundred barren-ground caribou. While on the ground banding geese, caribou would, at times, curiously approach but always stop short and watch us from a safe distance.

Focusing back on the Pantex Plant, which by the way, receives a very similar amount of snow annually as the North Pole, it is very unlikely that anyone will ever observe a caribou or reindeer here. However, we do have mule deer and white-tailed deer on the facility and elk sightings are not all that rare here in the Texas Panhandle. Our region even has a record of a moose that wondered into the northern part of our area for a brief period back in the late 1980s.

Mule deer in velvet at the Pantex Plant.

The deer tracks in the snow, a mere few feet from my building, brings to light a special reality about Pantex. Wildlife sightings are common, as are remarks that I hear from people that are along the lines of, “one of the great things about working at Pantex is the wildlife that we get to see.” Naturally that is music to my ears.

Here is to hoping that you get to enjoy the natural world wherever you may be, that you and yours have a safe and enjoyable holiday season.