Occasionally, Pantex staff comes across injured and very young wildlife in need of assistance. This often involves observations and captures by Natural Resources staff while out conducting fieldwork, or observations by Plant employees who are arriving at or departing the Plant, working at various job sites, or just walking between buildings.

My wildest experience with helping an injured animal involved a bobcat kitten that had been hit by a car. Out of concern, a team of Pantex Security Police Officers delivered the youngster to me and, fearing the worst, I delivered it to a local veterinary clinic licensed to care for wildlife. Let’s just say that the excitement centered on watching the veterinary staff trying to hold the kitten down on an x-ray machine in order to assess its injuries. The process involved several people and several repositionings of a not-too-happy feline in order to obtain the needed x-rays. In the end, however, the cat was ruled mostly healthy and able to be reunited with his mother and siblings. Because of our familiarity with the family as part of our research program, I was able to locate the female that evening and watched as the youngster rushed to his mother, who then led it and its three siblings off into the wilds of Pantex.

Although unfortunate that animals sometimes need assistance, Pantex is always happy to get them proper care from a wildlife rehabilitator. Through the years this has included the one bobcat kitten, several bats, and various songbirds such as cliff swallows, various birds-of-prey such as American kestrels, and a cattle egret.

The process starts with an evaluation of the animal’s condition and age. We can generally tell if a young bird is old enough to be out of the nest based on the species and appearance (degree of feathering and health). For example, great horned owl chicks often leave their nest a little earlier than one would expect and phone calls to me can be common despite the owlets being healthy and well fed. This is a well-known problem with deer and pronghorn fawns; where healthy fawns are often picked up by well-meaning folks and delivered to a rehabilitator. The rule of thumb for these cases is that if they are alive and appear healthy, they are being cared for and fed.

Pantex Natural Resources staff maintain a list of rehabilitators that are licensed to be able to possess and care for wildlife by the Texas Parks and Wildlife Department and the U. S. Fish and Wildlife Service. The process for getting animals cared for involves Natural Resources staff capturing or picking up the animal, and then coordinating with and making delivery to a rehabilitator. We always ask that the animal be returned to Pantex for release following rehabilitation.

Our most recent case of a wildlife species needing assistance involved an injured female American kestrel. I had already arrived at home following work, but by phone was able to coordinate the capture of the small falcon and make arrangements with the Wild West Wildlife Rehabilitation Center (Amarillo). The employees who found the kestrel were able to capture and then delivered it to the rehabilitator for care. The kestrel was successfully rehabilitated and then released at Pantex following a few weeks of veterinary care. We owe gratitude to the rehabilitation center for that successful rehabilitation, as we do to the South Plains Wildlife Rehabilitation Center (Lubbock) and associates of theirs in Amarillo, for cases in the past. Pantex is happy to assist wildlife in this manner and considers it a vital component of the wildlife program. 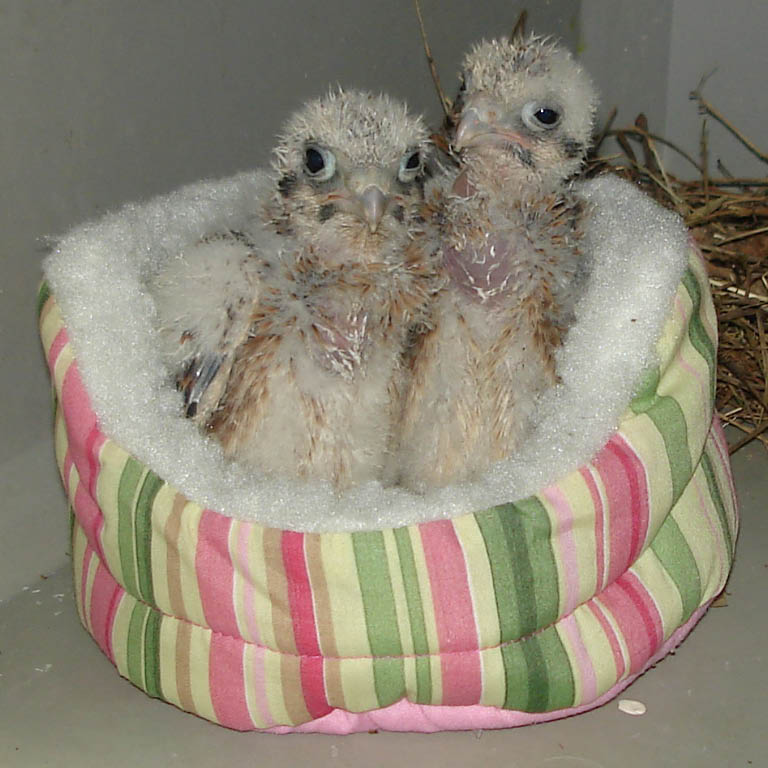 These nestling American kestrels are among a number of wildlife at the USDOE/NNSA Pantex that have received assistance from Pantex staff and licensed rehabilitators over the years.